Kananginak has been involved with drawing and printmaking since the late 1950s when the graphic arts program first began at Cape Dorset. Kananginak’s first print, a collaborative image with his father, Pootoogook, was included in the first catalogued collection of Cape Dorset prints in 1959. Since that time, Kananginak’s work has been included in almost every annual collection, and has been interpreted in many different print media — copper engraving, stonecut, stencil, lithography and etching. Kananginak was an accomplished stonecut printmaker himself — in the early years he often proofed and editioned his own work.

Kananginak and his siblings grew up in different camp areas on south Baffin Island. Their main camp was Ikirisaq where their father, Pootoogook, was the camp leader. Kananginak married Shooyoo from Cape Dorset in the mid-1950s. They lived at Ikirisaq until 1958 when they moved to Cape Dorset because of Pootoogook’s failing health.

Kananginak has been a prominent community leader. He was instrumental in the formation of the West Baffin Eskimo Co-operative in 1959, and served for several years as president of its Board of Directors. He is also a member of the Royal Canadian Academy of the Arts.

In 1978, four of Kananginak’s images were included in a limited edition portfolio released by the World Wildlife Commission. His work has been featured in numerous exhibitions, in both public institutions and commercial galleries. He is also a notable sculptor.

In 1997, Kananginak was commissioned by the Governor General of Canada, Romeo Leblanc, to construct an inuksuq in Cape Dorset, which was then dismantled and shipped to Ottawa. Kananginak and his son Johnny were then invited to Ottawa to re-assemble the inuksuq on the grounds of Rideau Hall as part of a tribute to Native people in Canada.

From the beginning, Kananginak has represented Arctic wildlife in his work, often monumental in scale. He is especially capable at drawing the many species of birds that frequent the Arctic. He has also done many memorable images illustrating the material culture of the Inuit, and narrative drawings of camp and hunting scenes. 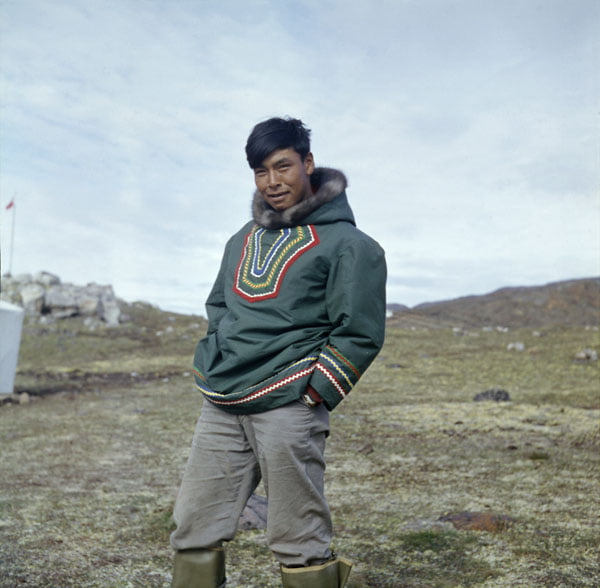 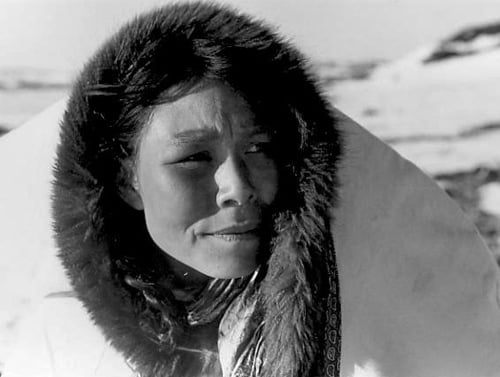 A Companion of the Order of Canada and winner of the Governor General’s Award in Visual and Media Arts, Ashevak is perhaps the best-known Inuit artist because of her famous print The Enchanted Owl (1960), which was featured on a Canada Post stamp. She was also the first woman to become involved with the newly established printmaking shop at Cape Dorset.
​
The Birth of an Artist Kenojuak Ashevak grew up on the land in the traditional, semi-nomadic hunting lifestyle, living in igloos and skin tents. Diagnosed with tuberculosis, she was hospitalized at Parc Savard Hosipital in Québec City from 1952 to 1955. There, she was introduced to Harold Pfeiffer, who taught patients arts and crafts as a way to pass the time and also make extra money — the hospital sold work on behalf of the patients. When she returned to Cape Dorset, Ashevak was encouraged to continue making art by James Houston, who taught the Inuit printmaking techniques and founded the West Baffin Co-operative.

Drawings and Prints Ashevak’s work gained almost immediate attention. Her first print, Rabbit Eating Seaweed (1958), for instance, was included in the Cape Dorset Print Collection and Catalogue. Ashevak’s early drawings had simple, bold forms, often featuring birds and creatures metamorphosing into one another. Her iconic The Enchanted Owl (1960), which was used on a postage stamp in the 1970s to commemorate the centennial of the Northwest Territories, has a spotted blue-grey owl gazing out at the viewer, feathers fanning out above its head and curving up from its tail. An untitled etching from 1962 features elongated twin bird-like creatures at the centre of which are a star and human faces. Another etching from 1962 features a spotted creature in the foreground that looks like a seal, its tail rising up into the neck and head of a bird, its head the head of a woman with a forking tongue; behind two apparently dancing birds is a child in a snowsuit with his or her back to the viewer.

As Ashevak’s art evolved, it became more complicated and highly stylized, eschewing the directness and clarity of her earlier efforts. In the ink and colour pencil drawing Dog Caribou Spirit with Birds (1988/89) there is a female caribou with a human head and bird feet, a bird streaming out of its sides, and in the elaborate Dog Mother Shaman Transformation (1988/89) there is a dog barking and what appears to be a half man, half spiky dragon bursting out of it. The work of Ashevak’s last years returned to her early simplicity, but this time with vibrant colour. Fine Feathers (2013) is just the body of an owl with orange-tipped feathers fanning out behind, and “Above and Below” (2013) has an aquamarine bird flying above what looks like a blue and green sea creature swimming in the opposite direction.

Born April 11, 1970 in Inuvik, NT, Rodney was raised in a creative home and started carving at the age of 5 years old. Rodney’s father George Kolausok was from Copper Mine and hunted for a living. When his father was not out on the tundra, he was also a carver of whalebone, antler and wood.

Rodney spent many hours watching his father carve, and learned his craft by carefully studying his father’s work. Rodney first started carving in wood and gradually moved into the more difficult soapstone and antler. By the age of 18, Rodney was creating beautiful full size sculptures in stone. While much of Rodney’s training came at the foot of his father, Rodney also spent many hours in his Cousin Leslie Firth’s studio, where he watched and learned the careful and delicate art of carving. Later in his career he studied under brothers Bill and Joe Nasogaulak. Under their tutelage Rodney’s own style and sense of humour began to emerge and he truly found his passion. From mythical scenes, arctic animals to depictions of Inuit legends, Rodney likes to keep his sense of humor alive by carving works that provoke thought.

Rodney is fascinated with history, culture and Inuit legends, and will regale the avid listener with countless stories of his experiences in the arctic. 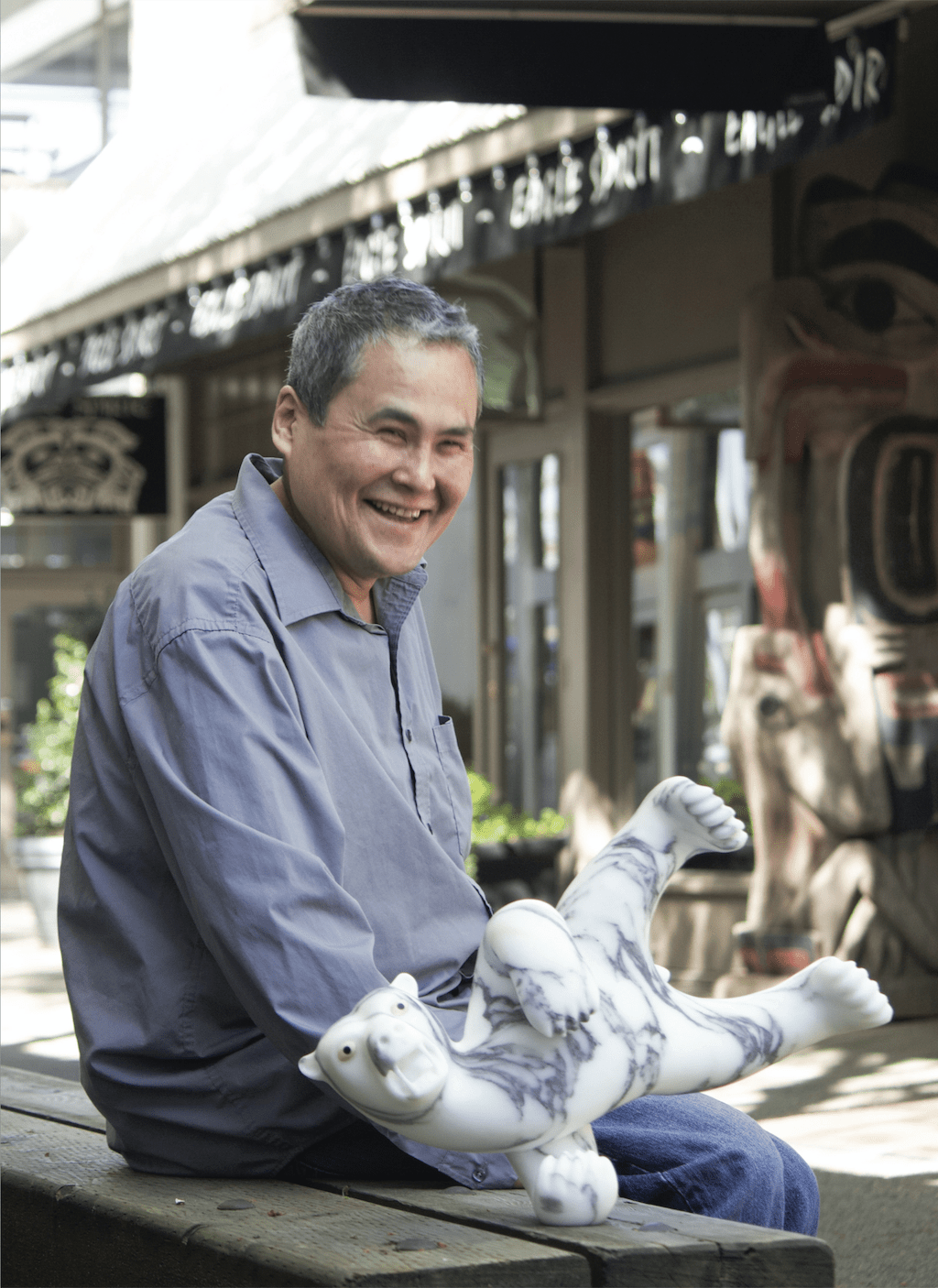 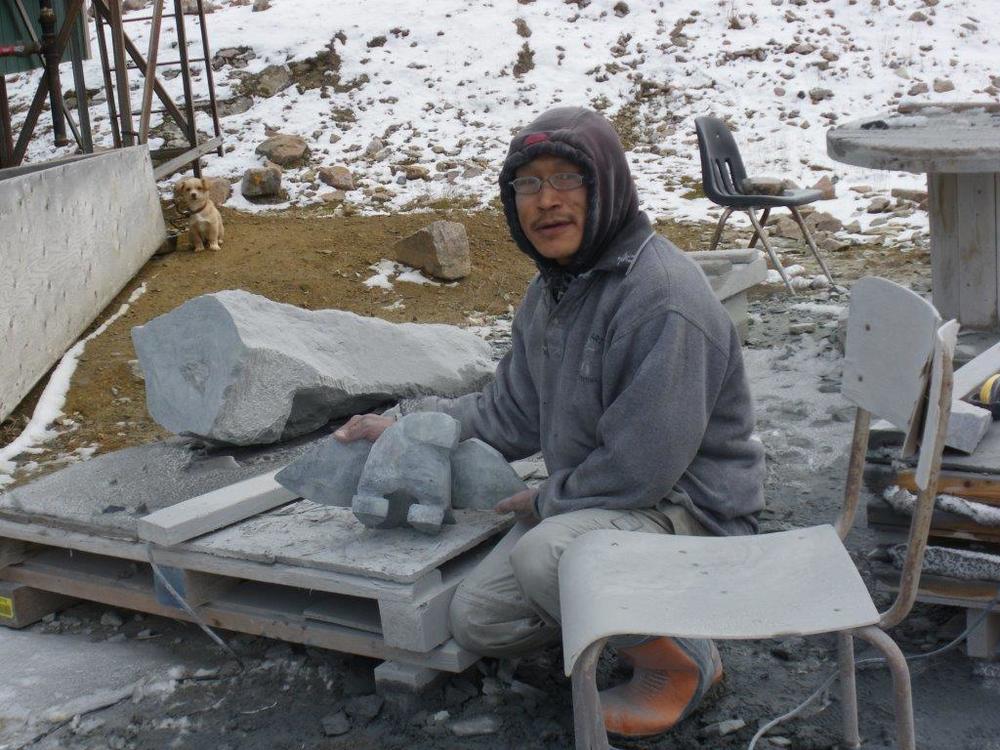 Toonoo Sharky attributes his development as a carver to his maternal grandfather Quppapik, the patriarch that provided for his entire family through hunting and carving. As a boy, Toonoo would watch his maternal grandfather carve and take notes in his technique. It is often through such intimate moments of observation that young Inuit learn the traditions and practices of their ancestors.

In 1979, Sharky, Toonoo’s paternal grandfather, and Toonoo’s father Josephee, both passed away tragically in a boating accident;  Toonoo was  only 9 years old. After this horrifying event, Ragee, his mother, and the children moved to Kimmirut (Lake Harbour).  It was in Lake Harbour that Toonoo started carving himself, and would continue to do so into his teens, when the family moved back to Cape Dorset.

For Toonoo, the loss of his paternal father and grandfather at such a young age was a significant event for his artistic development. Without these important father figures to guide him through life, much of what Toonoo has learned about art has been through self-study.
He feels that in some respect, the moments of solitude taught him to truly immerse himself in stone carving.  Moreover, this independence— albeit an undeniable challenge— encouraged him to find a way to survive through his art.

What Toonoo carves comes from the spirit in the stone, as much as it comes from his own spirit, mind, and imagination — and can be strongly felt in his work. Changes to Toonoo’s style are a natural development. He often experiments with different stones of different sizes,  and  tests out different natural materials for his acclaimed inlay work. In some instances, Toonoo takes the stone to its limit by carving it as thinly as possible to add a fluidity and transformative quality that defies the inherent stealth nature and durability of stone. Today, birds continue to be Toonoo’s favourite subjects. Meanwhile, fish, Shaman, transformations and masks have developed as features to the artist’s prolific body of work. Toonoo continues to work as an artist and his sculptures can be found in personal and corporate collections around the world.

View the work of