​Norval Morrisseau, also known as “Copper Thunderbird,” was a self-taught Aboriginal Canadian artist born on the Sand Point Ojibway reserve near Beardmore, Ontario. His full name is Jean-Baptiste Norman Henry Morrisseau, but he signs his work using Cree syllabic writing. He was honoured with the Order of Canada and Lifetime Achievement Award from the National Aboriginal Achievement Foundation as well as Holder of the Eagle Feather, the highest honour awarded by the Assembly of First Nations.

​Known as the “Picasso of the North”, Morrisseau’s style is characterized by thick black outlines and brilliant, neon-like colours. The themes of his work includes the legends of his people, the cultural and political tensions between First Nations and European traditions, his existential struggles, and his deep spirituality and mysticism.

One of Morrisseau’s earliest commissions was for a large mural in the Indians of Canada Pavilion at Expo 67’, a revolutionary exhibit voicing the dissatisfaction of the First Nations People of Canada with their social and political situation. In 1978 he was recognized for his outstanding artistic achievements and was granted membership into the prestigious Order of Canada; the second highest honour for merit in the system of orders, decorations and medals of Canada. Among his many other contributions to the arts, he founded both the Thunderbird School of Shamanistic Art and the Woodlands School of Canadian art. In 2005 and 2006, the National Gallery of Canada in Ottawa organized a retrospective of his work which was the first solo exhibition of an indigenous artist at the Gallery.

In the 1970s, he established his studio on Granville Island in Vancouver, BC and worked closely with Robert Scott, the owner and director of Eagle Spirit Gallery. In the final months of his life, the artist was confined to a wheelchair in a residence in Nanaimo, British Columbia. He was unable to paint due to his poor health. On December 4, 2007 at Toronto General Hospital, he died of cardiac arrest—complications arising from Parkinson’s disease. He was buried after a private ceremony in Northern Ontario next to the grave of his former wife, Harriet, on Anishinaabe land. He was posthumously honoured with a Lifetime Achievement Award by the National Aboriginal Achievement Foundation.


“My art speaks and will continue to speak, transcending barriers of nationality, of language and of other forces that may be divisive, fortifying the greatness of the spirit that has always been the foundation of the Ojibwa people.“
​          – Norval Morrisseau in Norval Morrisseau: Travels to the House of Invention 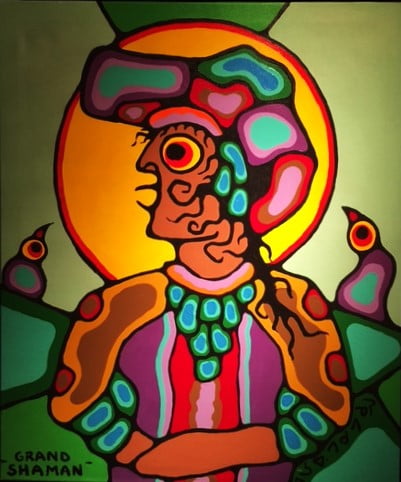 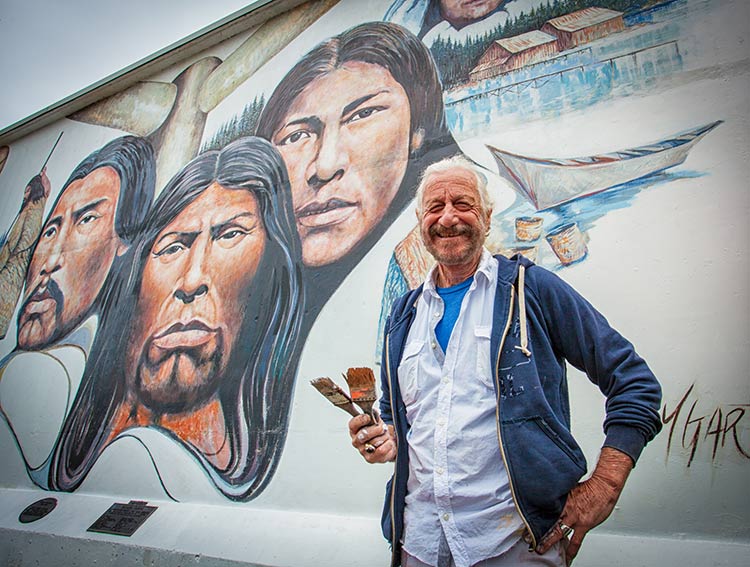 ​Creation and interpretation is Paul’s life. In painting he is at home in all mediums and his production is prodigious. Paul started his artistic career as a qualified gold and silversmith with a degree in design. Paul then turned to painting immediately after graduating from the Liverpool School of Art.

His most recent works provoke a response that is both physical and emotional. His application of colour and line enables Paul to capture the essence of the subject with a spontaneity unparalleled by many. His technique in colour is startling and impressive and his use of the pallet knife is bold and convincing.
Paul’s monumental murals and domed ceiling have received international  acclaim and the power of his achievement is appreciated and recognized by many collectors world- wide.
He is the creator of some of the most famous images in Canada such as his Heritage Series; which are instantly recognized by most Canadians and have been a part of the British Columbia identity for decades. He is also the architect of some of the largest murals in North America and Europe  His paintings are in public and private collections worldwide and are treasured for their intrinsic and real value.

In July of 2011, Paul Ygartua finished restoring the ‘Legends of the Millennium’ mural. It’s on two continuous walls of the Beachcomber Building and measures over 9000 square feet! It is considered “one of metro Vancouver’s most famous works of art….”. Ygartua originally painted it in the year 2000. Then, as now, it was done singlehandedly with a brush…no graphs, no projections, no helpers. The American website AskART considers it probably the largest mural ever painted by a single artist. Video courtesy of Citytv Vancouver, July 4, 2011.
His works are discussed in “Artists of British Columbia” (1986), by Derek Morys-Edge; “The Collector’s Dictionary of Canadian Artists at Auction” (2001), by Anthony R. Westbridge and Diana L. Bodnar; “Famous” (2007), by Petru Russu; “Place Makers: Creating Public Art…” (2007), by Ronald Lee Fleming and Renata Von Tscharner; and “International Contemporary Masters Volume III” (2010), by Despina Tunberg. He is also the subject of the monograph “Primordial Chaos” (2008), by Carlo Cambi and Flora Rovigo.

The Maori are the tangata whenua (indigenous people of the land) of New Zealand and their Maori culture and art in New Zealand is an integral part of New Zealand life. About 15% of the country’s population of 4.1 million is of Maori descent. New Zealand has an increasingly lively and multicultural arts scene, and the Maori culture plays a big part in this.

​Russell is one of the most exciting Maori artists working today. He grew up in Hastings but is currently residing in Australia. A self-taught artist he worked for 10 years as an art agent and was surprised when people in his artistic circles found his work exciting. Their positive assessments spurred him to delve deeper into his artistic abilities and discover his hidden talents. His work reflects and encompasses three focal elements: earth, sky & water. Russell’s paintings are colourful and warm yet abstract in essence, each with its own special personality.

“There are earthly elements at work in my paintings, inspired by life itself – I find never-ending inspiration in the world around me, and the interaction between man and nature. Also, the tribal roots of my family, provides me with a constant source of pleasure, which in turn, manifests itself in my artwork.“
– Russell Kereama

Russell’s paintings are also showcased in corporate, private and gallery collections around the world. 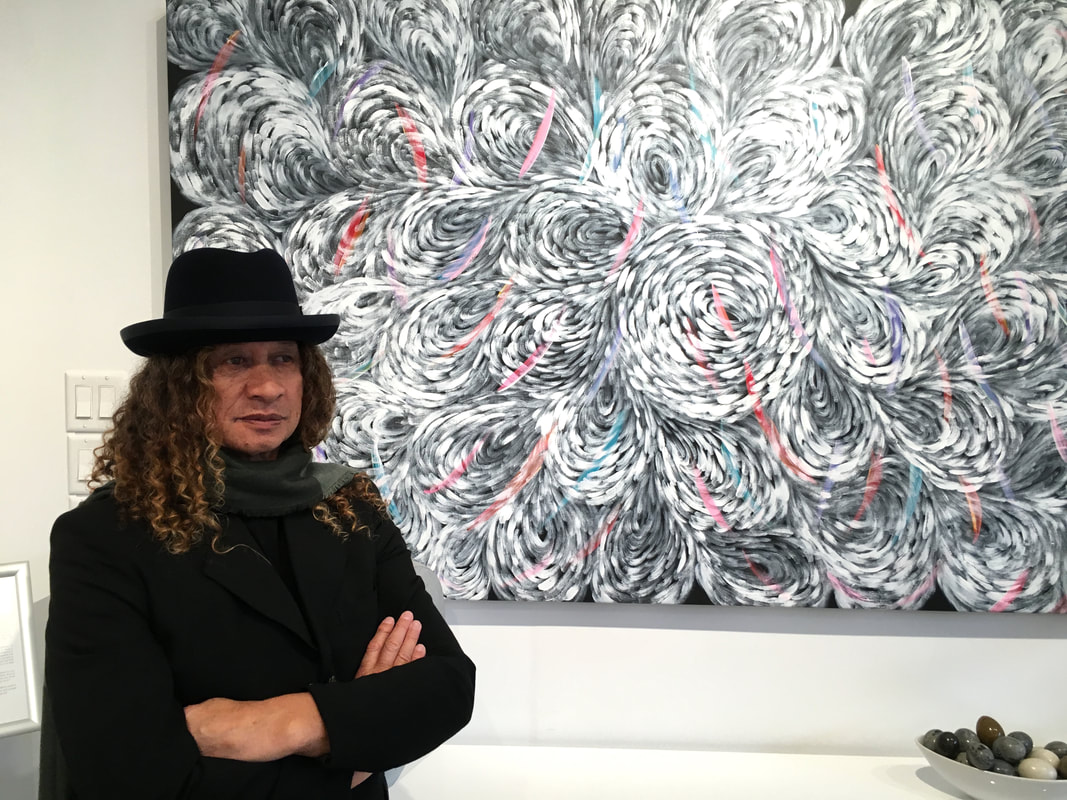 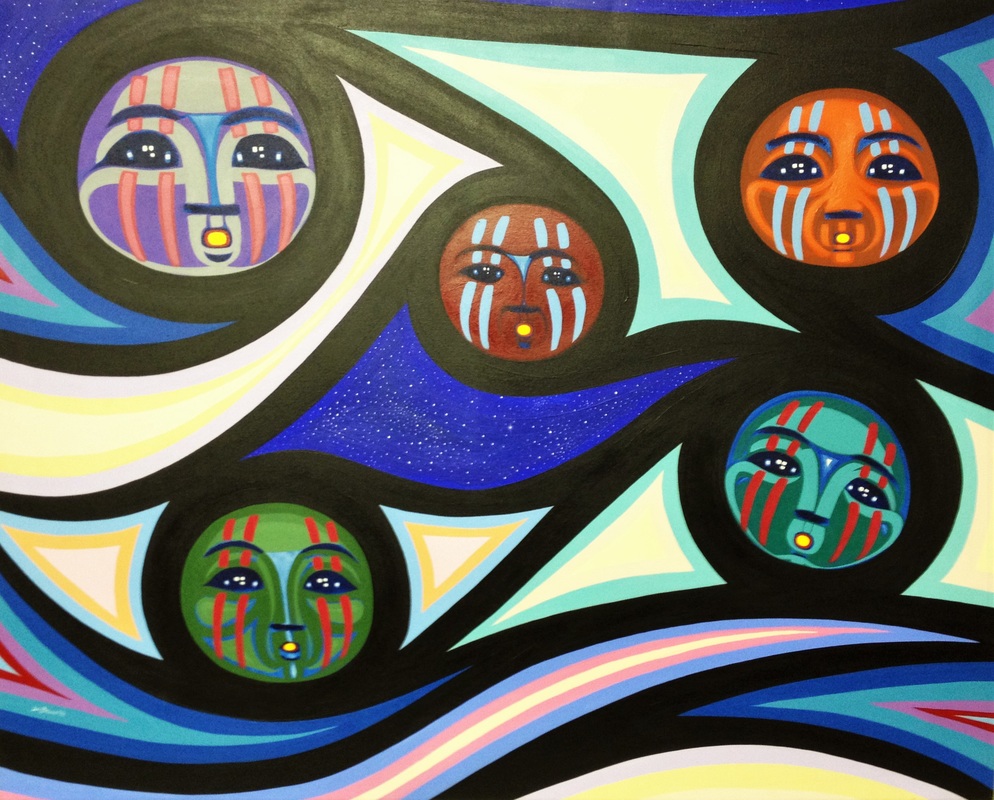 Dennis M. Bruce was born in Lestock, Saskatchewan to the Muskowekwan Band (Saulteaux) He is an artist who has ventured beyond his peoples traditional artistic styles to find himself on the leading edge in the contemporary scene of Canadian aboriginal art. Using traditional symbols such as the eagle, the buffalo, the warrior, the mother and child, Dennis stays true to his heritage, however, his use of colour and line is masterfully unique. There is a fluidity of motion that carries throughout his warrior theme. His sense of family is strong. Huge canvasses carry his defiant style.

View the work of